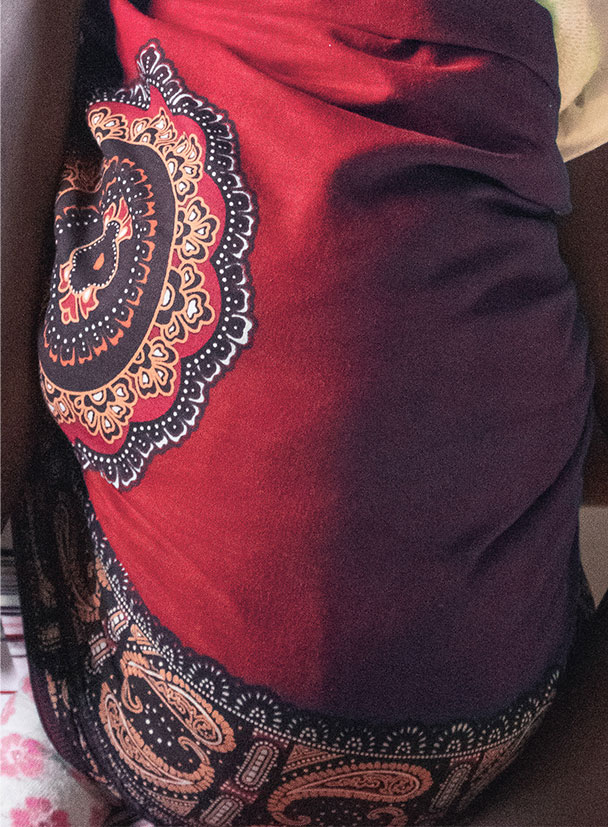 Photographer Paul Nguyen provided both textual and audio descriptions of his work, a series of seven photos, with each one highlighting a color of the rainbow.

“In 2019, as part of the Global Health Scholars Program, I traveled to Macha, a small village in rural Zambia.

“Every week, I joined a research team to help set up a HIV clinic in several of the surrounding rural villages. I soon became a familiar face in these villages, and when I began to offer portraits, people found me to take photos of their families, marital engagements, sporting events and music. At the end of the week, I would hitchhike to Choma, a city an hour away with a printer, and I would bring the photos back to distribute. Every portrait I took, people received a copy because instead of taking photos, I wanted to give photos.

“I chose these seven portraits, and an accompanying contextual photo, to represent an aspect of the culture or community in Zambia.”

Listen as Nguyen takes photos in a Zambian schoolroom where Chico is the teacher.

4: Portraits of Lisa, Blessing and Edwell

Nguyen shares his experience talking to a family during “load-shedding,” or a time of reducing the use of power.

Hear as Nguyen describes the reaction of a woman who sees test results showing a newborn is HIV-positive. (The test was later found to be a false positive.)

Nguyen describes meeting a young man who describes his LGBTQ+ identity in Zambia, where such an identity is cause for imprisonment. Since Nguyen could not show this man’s face, he instead chose to frame his exhibit as a pride rainbow, where each portrait features a different color, beginning with Sandra in red as seen on this page. This, Nguyen said, is a tribute to the often invisible LGBTQ+ community in Zambia.

Finding the next stop

Go back to the Cancer Institue elevators and go to the first floor. Turn left. Go past Starbucks and toward the Tree House Café. The next piece, “Outdoor Escape,” is on the right.